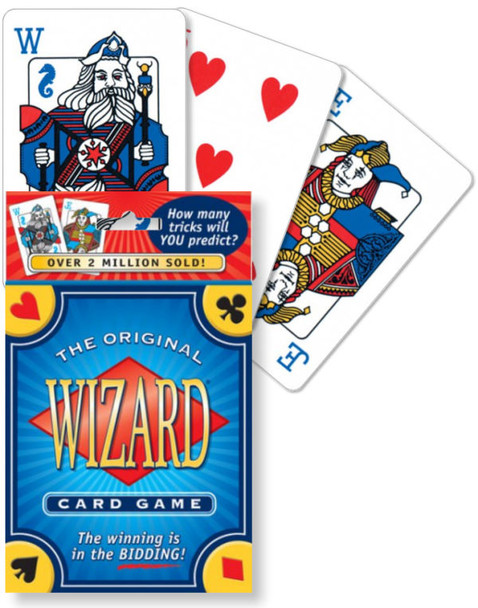 More fun than Hearts and Rummy, award-winning Wizard is "the Ultimate Game of Trump" the whole family can enjoy. The rules are easy to learn- the strategy adds an exciting challenge. In Wizard, players try to win the exact number of tricks they bid.

The Wizard deck is similar to a regular deck of playing cards with the addition of four Wizards and four Jesters. Jesters always lose and Wizards always win. In the first round, players start out with one card. In the second round, players are deal two cards, and so on, with each round becoming more challenging. When you make your exact bid, you earn points. If you take too many or too few tricks, you lose points. The special, custom Wizard Score Sheet helps players keep track of bids and points. Wizard Card Game can be played with 2-6 players. Instructions are in English, French, and Spanish.

- The annual Wizard World Tournament is held in a different country each year.

The Development of Wizard Card Game

Ken Fisher of Toronto, Canada first conceived the card game "Wizard" at his lakefront cottage in Haliburton, Ontario. He wanted a card game that he could play with his wife and young son as well as other vacationers during the quiet evening hours. Building on the basic game play of the traditional card game "Oh Hell," Ken modified some of the rules and added 8 additional cards, 4 Jesters and 4 Wizards, which radically improved the game. The rules are very simple, but the strategy involved in playing Wizard makes it both enjoyable and challenging.

Wizard Card Game was self-published in 1986 with a first production run of 10,000 games. In 1991, fueled by an enthusiastic public response to Wizard, a complete graphical redesign was undertaken which brought the card-fronts essentially to their present design. In 1994, Ken Fisher granted world rights to U.S. Games Systems, Inc. of Stamford, Connecticut. The overall quality of the cards was vastly improved and the current card back was instituted.

Since its introduction in 1986, Wizard Card Game has been translated into 15 languages and is sold in China, Czech Republic, Finland, Greece, Indonesia, Malaysia, Kazakhstan, Lithuania, Japan, Slovenia, Sweden, Switzerland, and Russia to name a few countries.

MSRP:
Now: $9.99
Was:
This 56" long wood pole features a clear sleeve to keep the flag from wrapping around the pole on windy days.  It also has a anti-slip ring with clip. It's been our number one selling pole for...

MSRP:
Now: $19.99
Was:
It's a dice game and so much more!  Let the five dice roll to achieve the best combination and win the corresponding chip. Players compete to grab the best chips before they run out and plan...

MSRP:
Now: $13.99
Was:
Five Crowns is a card game for the whole family. It has original game play, but uses skills that you have obtained from playing your old favorites like Hearts, Spades and Rummy. Because Five Crowns...