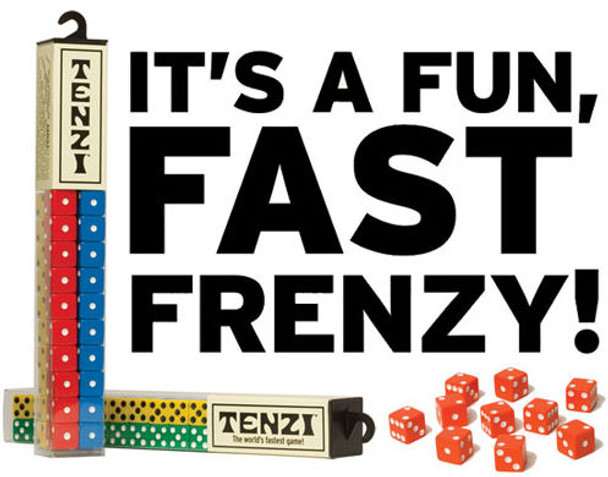 Everyone gets ten dice. Someone says "Go." Then everyone rolls and rolls as fast as they can until someone gets all their dice on the same number. Sure, there are a few more rules, but you get the idea!

OBJECT:
Be the first player to get all ten of your dice to show the same number.

HOW TO PLAY:
(2-4 players.) Each player chooses a set of dice. Players hold all ten dice in their hands. Someone says "Go" and everyone rolls at the same time. Quickly look at your roll and decide which number you are going to go for. (For example, if you have more 3's than any other number, that's what you want to go for.) Put all your dice with that number aside, collect the remaining dice and quickly roll again. (You do not have to wait for others to roll again. Everyone rolls together only on the first roll.) Keep rolling until all ten of your dice show the same number.

WINNING:
The first player to get all ten of their dice to match (ten 3's, for example) shouts out "TENZI" and wins the game!

And there are lots more ways to play!

TENZI TOWER:
Instead of putting your successfully rolled dice aside, stack them one on top of the other. First player to get all ten of their dice stacked and shout "TENZI" wins!

TEAM TENZI:
Join forces and play in teams! Get all your team's dice on one number. Or play this way - each team member goes for a different number!

MEGA TENZI:
Ten dice not enough for you? You'll really have your hands full with twenty dice! Double the challenge, double the frenzy!

STEALZI:
If you see another player roll the number you're going for, steal those dice and give the player an equal number of your dice. No stealing on the first roll of the game, or from any player going for the same number as you!

TARGET TENZI:
All players declare which number they're going for before the first roll. Or, decide on one number that everyone has to go for!

With so many different TENZI color combinations, we can't guarantee which colors you'll get, but we can promise a whole lot of TENZI frenzied fun!

Each game includes 40 dice (ten each of four different colors), and a rules sheet.

MSRP:
Now: $16.99
Was:
Feisty Dice Game Ignite game night fun with this heated family game of shake and take! With a little luck and some light strategy, you can win by being the first player to check off each color box...

MSRP:
Now: $19.99
Was:
Slapzi is a fast paced, quick thinking card game from the makers of Tenzi. Flip over one clue card at a time as players scramble to find a card in their hand that they can slap down before someone...

MSRP:
Now: $14.99
Was:
99 More BUILDZI Towers Ready for more BUILDZI? Here are 99 more towers to create! (Expansion requires BUILDZI to play. Blocks not included.) BUILDZI is a speed-building game by the creators of...

MSRP:
Now: $6.99
Was:
LCR/Left Center Right is a fun, fast-paced dice game that you won't be able to put down! 3 specialty marked cubes are rolled to determine where players distribute their chips as they compete to keep...

MSRP:
Now: $6.99
Was:
Snap-perz are a fun and super fun fidget that fits in one hand! Just hold between your palm and fingers and squeeze to hear the snap. Recommended for ages 3 and up.