T-Rex: Battle of the Giants 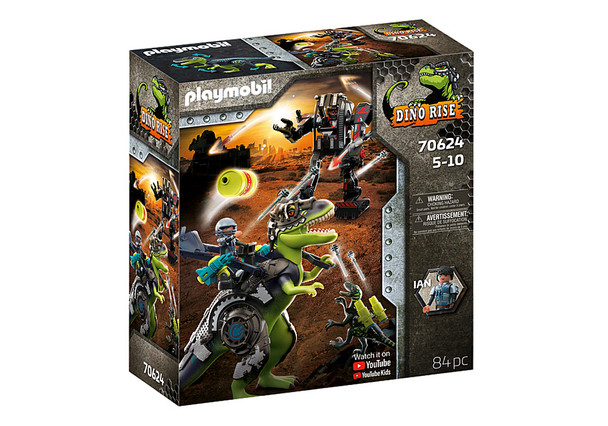 T-Rex: Battle of the Giants

Equipped with firing cannons, barrel catapult and removable armour. Ian can ride the T-Rex. Attention - the T-Rex is attacking! The T-Rex? Oh no, that's a hypermodern fighting robot and whoever is controlling it is up to no good. The robot fighting machine is on destruction course. Who is going to stop it? Suddenly intrepid Ian blocks the machine's path, and he's not alone. Ian sits on the back of a real T-Rex with titanium strong protective armour, equipped with cannons and a catapult. Together with the dinosaur and super advanced combat equipment, the two bravely face the machine. A battle of the giants begins! Get ready for an action-packed dino adventure! Arm yourself with your dino team in ultimate combat gear against the battle robots and save the world.
View AllClose

MSRP:
Now: $12.99
Was:
Dig up and excavate your own T-Rex skeleton with this kit! Kit includes a plaster block and a digging tool so you can dutifully excavate each tool that once belonged to the mighty T-Rex...

MSRP:
Now: $79.99
Was:
Giant T-Rex Plush Rawr! Standing at nearly 3 feet tall, this cuddly yet ferocious t-rex is sure to make an impression. Looks great standing guard over your child's room.

MSRP:
Now: $10.99
Was:
Soft foam flying fun! Just load the soft foam ball into the dino's nose and squeeze his belly to launch the ball. The harder you squeeze- the further the ball goes! Six balls and a carry net are...

MSRP:
Now: $6.99
Was:
DuoPack Velociraptor with Dino Catcher A cunning looter has it in for the Velociraptor. He tries to lure the animal into the trap and tame it with the net. Will he succeed in catching the dinosaur?...

MSRP:
Now: $5.99
Was:
Looking for something punny? No prob-llama!  These Barnyard Punimals will quack you up. Recommended for ages 3 and up. Please note the batteries are inaccessible and non-replaceable.

MSRP:
Now: $99.99
Was:
Scooby-Doo, Fred & Daphne are on the case to investigate the secrets that lie inside the Mystery Mansion™. Spooky surprises await them in shadowy corners and creaky corridors, and nothing should be...

MSRP:
Now: $59.99
Was:
Equipped with firing cannons and removable armour. Samu and Ayla can ride the Spinosaurus.

Triceratops: Battle for the Legendary Stones

MSRP:
Now: $39.99
Was:
Equipped with a working safety net cannon and removable armour. Jaden can ride the Triceratops.

MSRP:
Now: $14.99
Was:
These little figures are just waiting for someone to pick them up and play with them! Perfect for adding to a larger set, or for playing with solo!

MSRP:
Now: $21.99
Was:
This is really interesting: Plesiosaurs had a broad flat body and a short tail. Their limbs had evolved into four long flippers, which were powered by strong muscles attached to wide bony plates...

MSRP:
Now: $16.99
Was:
This is really interesting: Plesiosaurs had a broad flat body and a short tail. Their limbs had evolved into four long flippers, which were powered by strong muscles attached to wide bony plates...