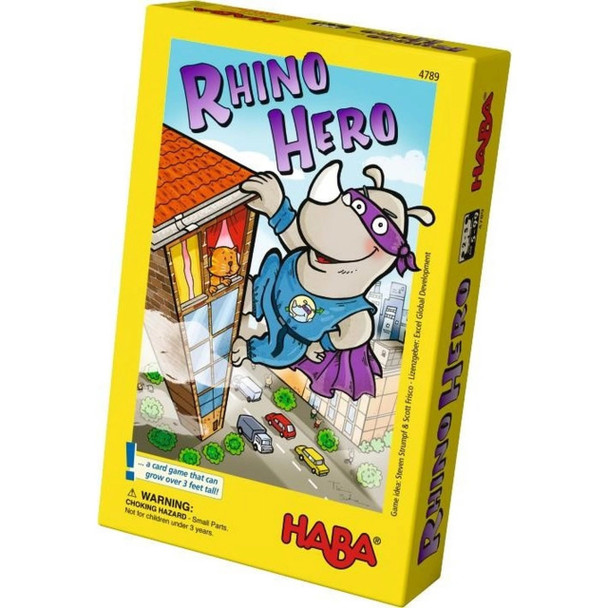 What is that? Is that a rhino climbing up the wall? Rhino Hero is out and about again. The super hero from the animal world fearlessly scales the highest houses looking for burglars and rogues. He is strong as a lion and as smart as a fox, but also as heavy as a rhinoceros. So when Rhino Hero is around, even the most robust tower may start to wobble.

Can you help Rhino Hero accomplish his wobbly construction mission and build a skyscraper as tall and solid as possible? A heroic 3D card-stacking game!

MSRP:
Now: $11.99
Was:
Pass the sushi! In this fast-playing card game, the goal is to grab the best combination of sushi dishes as they whiz by. Score points for making the most maki rolls or for collecting a full set of...

MSRP:
Now: $9.99
Was:
About Wizard Card Game More fun than Hearts and Rummy, award-winning Wizard is "the Ultimate Game of Trump" the whole family can enjoy. The rules are easy to learn- the strategy adds an exciting...

MSRP:
Now: $24.99
Was:
From the makers of our favorites, TENZI and SLAPZI comes this new fun game! The fast-stacking, nerve-racking, block-building game! Quick, grab a BUILDZI block and start building. Be the first to...

MSRP:
Now: $99.99
Was:
The A-Team Van The A-Team are four ex-elite soldiers on an unusual mission. Sent to prison by a military court for a crime they did not commit, they escaped and now help others in need. If you have...

MSRP:
Now: $24.99
Was:
I ♥ Cocoa Bombs Intro Set Chefs of all ages can explore the delicious world of cocoa bomb fun with this 4 piece starter set! With all the essential tools needed to make three perfectly shaped...

MSRP:
Now: $7.99
Was:
Bicycle Euchre Two Deck Set Easy to learn and fun to play, Euchre offers both beginners and experienced players the opportunity to develop valuable card-playing strategy and techniques. Euchre is...

MSRP:
Now: $12.99
Was:
Chicken Chicken Game An Egg-cellent Memory Game Count your chickens before they hatch! Reveal cards one at a time, keeping a mental tally of the eggs. Be the first to slap the pile when you think...