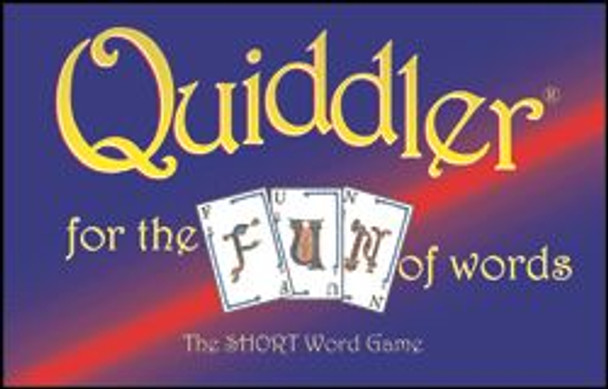 Quiddler is a beautiful word game with naturally smooth game play that plays fast. These are essentials for a successful game that few word games have. Using special cards, Quiddler draws on one's ability to combine letters into words. Players must combine their entire hand into words trying to use the highest point value letters. Quiddler challenges you to do this first with three cards (round one), then with four, on up to ten cards in the last round. A bonus is given for both, the longest word, and the most words made by a player in each round. The average game takes 20-40 minutes.

Although it may appear that the person who knows the most words would consistently win, this is not the case when playing Quiddler. There is a visual perception aspect that draws on combining the cards with the highest points into the words rather than the first words a player recognizes. There is also an element of strategy. Players who win often, don't go out at their first opportunity; on the other hand, sometimes they go out as soon as possible. Their actions are aimed at increasing their odds of getting either the longest word or the most words bonus.

The game works well for both, beginning readers and accomplished word game players. Youngsters can enjoy Quiddler because players can win using short words. This results from the bonus for getting the most words in any round, which, of course, is obtained using short words i.e., zoo, is, of. On the other hand, accomplished word lovers are challenged because of the bonus given for the longest word in any round, as well as the aspects noted above.

The solitaire rules included with Quiddler result in endless hours of word challenges for the single player. Although each game is quick to play (about 15-20 minutes), people have tended to play game after game.

MSRP:
Now: $26.99
Was:
Qwirkle is as simple as matching colors and shapes, but this game also requires tactical maneuvers and well-planned strategy. Earn points by building rows and columns of blocks that share a common...

MSRP:
Now: $37.99
Was:
Take the piece your opponent selects for you and play it, trying to get four in a row with shape, color, size, or hole/no hole in common. Takes 30 seconds to learn, but has so many possibilities that...

MSRP:
Now: $29.99
Was:
There are three different types of visual challenges with this Q-bitz game.  The first round you have to go as fast as you can to arrange your cubes and copy the pattern on the Q-bitz card...

MSRP:
Now: $17.99
Was:
Anomia: [uh-NO-mee-uh] - Noun - 1) A problem with word finding or recall. 2) Chaos. 3) The game where common knowledge becomes uncommonly fun! Anomia plays off the fact that our minds are positively...

MSRP:
Now: $37.99
Was:
The aim is to reach the other end first. The problem is that your opponent puts up fences to slow you down! Not to worry, there's always a way out. But who will find the shortest route?Players take...

MSRP:
Now: $14.99
Was:
Everyone loves a good spinner on a kite line. Whether to help stabilize a kite that just won't fly straight or to decorate your lawn on a windsock pole, this spinner is always a sure bet.

MSRP:
Now: $19.99
Was:
It's a dice game and so much more!  Let the five dice roll to achieve the best combination and win the corresponding chip. Players compete to grab the best chips before they run out and plan...

MSRP:
Now: $6.99
Was:
LCR/Left Center Right is a fun, fast-paced dice game that you won't be able to put down! 3 specialty marked cubes are rolled to determine where players distribute their chips as they compete to keep...