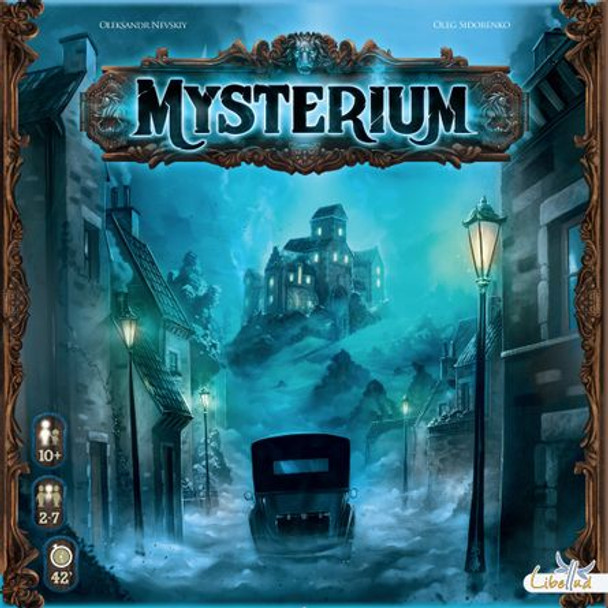 Will you dare to enter the Mysterium Manor?

A ghost haunts the manor. It is the spirit of some unfortunate victim, killed many years ago in mysterious circumstances. A few psychics decided to gather to reconstruct the events of that fateful night. However, they cannot succeed without the ghost, who tries to help them by sending visions. These visions are hints that should lead them to the truth. Time is again them, though - at sunrise, the ghost will disappear.

In this cooperative game, player investigate together to find the culprit. One player plays the ghost and communicates with the others, using nothing but illustrated cards. On each turn the other players (the psychics) interpret these cards and work together to understand which suspects, locations, and objects they are supposed to find.

They have seven turns to solve the mystery!

Includes for the ghost:

Includes for the psychics:

MSRP:
Now: $39.99
Was:
It's Sudoku for people who are more visual than math-based. Start with clues from one of the 104 puzzle cards, and then try to place a single ball of each color in every row, in every column, and in...

MSRP:
Now: $21.99
Was:
Zingo is, Bingo with a Zing! It brings fast-paced leaning and excitement to the classic Bingo game. To play, slide the Zinger to reveal picture tiles, be quick to make a match to fill your Zingo card...

MSRP:
Now: $29.99
Was:
This Corsair plane kite was meant to soar through the sky.  Take it on a grand adventure next time you find yourself outside on a windy day.  Its easy to assemble and very stable.  The...

MSRP:
Now: $29.99
Was:
Explore the seas! Catan: Junior lets younger players experience the world of Catan by introducing a simpler playing style. Designed for 2-4 players as young as 6, it's a perfect introduction to the...

MSRP:
Now: $3.00
Was:
Accompanies the build your own Easter basket: Easter Baskets!

MSRP:
Now: $28.00
Was: $34.99
Planet is an environmental drafting board game featuring unique 3D planet cores, for science and nature enthusiasts. This best-selling board game has an amazing table presence with magnetic...

MSRP:
Now: $59.99
Was:
This ultimate light-weight product is ingenious!  Use a regular box fan (not included) to inflate the roomy play area. The AirFort® is big enough for lots of friends. At 6.5 ft. in...

Photosynthesis - The Green Strategy Board Game

MSRP:
Now: $32.00
Was: $39.99
Discover and master the life cycle of trees from seed to soil, start to finish. Photosynthesis is an awesome strategy game that also doubles as an educational tool for anyone interested in the...

MSRP:
Now: $29.99
Was:
In order to play the Catan 5th edition extension game you will first need the Settlers of Catan game.  This extension is compatible with the Catan 4th Edition base game, expansions and...