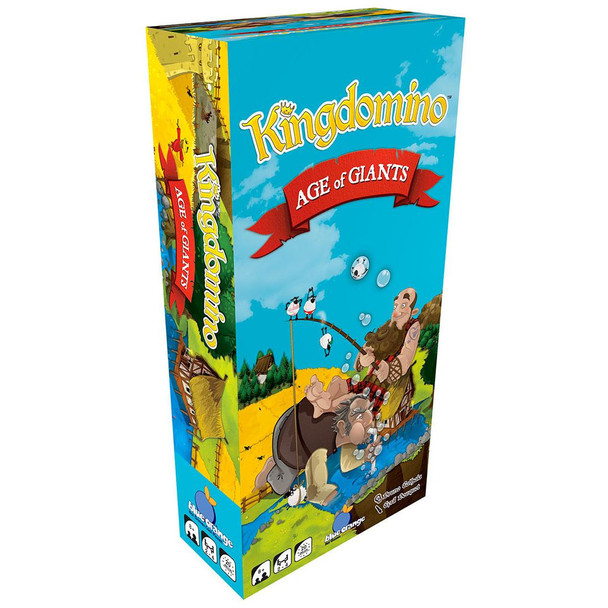 Age of Giants is an expansion for Kingdomino or Queendomino. It adds more challenges, more player interaction, and allows for a fifth player to join in on the game. Choose a tile with a giant, then add a giant meeple to your kingdom- it covers up any crown of your choosing. Choose a tile with a giant's footsteps, then pass one giant meeple from your kingdom to another player, who then must cover up a crown in their own kingdom. Covered crowns do not score points. End of game bonuses are eliminated, instead, before the start of each game, players must draw 2 challenge tiles. These provide additional ways to get points. For example, get 5 bonus points for each lake tile that surrounds your castle, and get 20 bonus points if your castle is located in one of the 4 corners of your kingdom.

MSRP:
Now: $19.99
Was:
Take your favorite old-fashioned game of dominoes and add a kingdom building twist! Each turn, connect a new domino to your existing kingdom, making sure at least one of its sides connects to a...

MSRP:
Now: $11.99
Was:
Big fun! You'll love seeing all the things you can do with this giant slinky! Recommended for ages 5 and up.

MSRP:
Now: $29.99
Was:
You are a royal, seeking new lands to expand your ever-growing kingdom. Explore and conquer the different terrains, and develop the best and richest territories for your people. Scour lands full of...

MSRP:
Now: $19.99
Was:
Take your favorite old-fashioned game of dominoes and add a kingdom building twist! Each turn, connect a new domino to your existing kingdom, making sure at least one of its sides connects to a...

MSRP:
Now: $29.99
Was:
You Who Game The family friendly version of Friend or Faux. It turns "let's talk" into "let's play!" and helps build connections by making communication fun and easy through game play. Perfect for...

MSRP:
Now: $29.50
Was:
MEN'S BOATS WELL WITH OTHERS CRUSHER-LITE TEE Washed for everyday softness, this classic fit customer favorite barely skims the body for a look that's as easygoing as you are. - 100% USA Grown...

MSRP:
Now: $27.99
Was:
Home Sweet Coast Guard Home House Banner Whether a Coastie lives here or you call Coast Guard City home, this banner will show your suppport of the men and women who make our home waters...

MSRP:
Now: $40.99
Was:
Baby Stella Peach Doll with Blonde Hair This Baby Stella doll has peach skin and blonde hair pigtails and is dressed in a green outfit with hearts with closures for easy dressing. Baby Stella by...

MSRP:
Now: $26.99
Was:
Nature Rainbow 6x Silicone Teether and Toy Have you ever thought of a toy that grows and evolves with your baby? We only see a rainbow, but children find endless possibilities for play and learning...