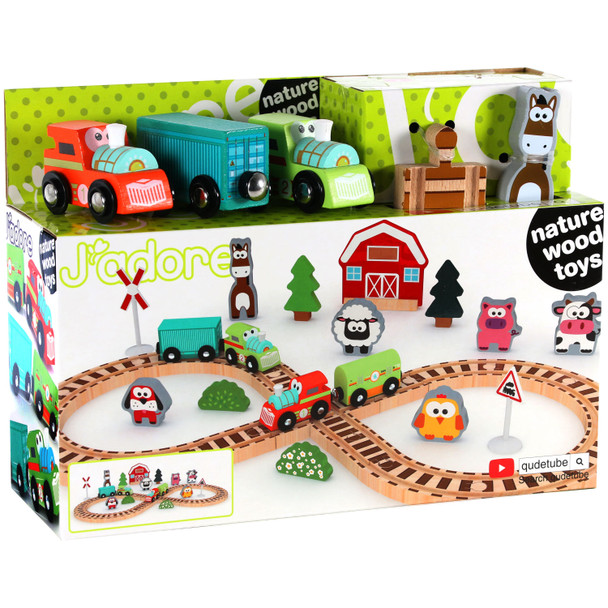 It's like two play sets in one! This is a great set for sharing. Two trains and plenty of animals encourage collaborative play as kids make up stories together.

"Where is Engine 2 this morning?" clucked the chicken nervously. "I saved her some eggs for breakfast."
"I'm not sure," said the dog, sniffing the air. "She should have been here a while ago. I'll see if the cow knows!" And he bounded off to the barn.
The cow was worried too. Their good friend Engine 2 hauled the tanker that took the cow's milk to the city, and she was never late. Just then they heard a train puffing up the tracks. As it came 'round the bend, they saw that it was their other friend, Engine 1, with a load of bricks and lumber for a new barn. Maybe he would know!
"Ah, it's trouble for sure," said Engine 1. "I heard over the radio that she's stopped down near the railroad crossing. A tree fell on the tracks and she can't get past!"
"I can help!" whinnied the horse. "I'm big and strong. I'll push it off the tracks!" And off he galloped, down the road in the direction of the crossing.
"I don't know," puffed Engine 1. "They said it's a big, old pine tree. It might be all day before they can get a crew together to come cut it up."
"Oh no!" mooed the cow sadly. "The milk will all be spoiled by then."
"Let's all go!" snorted the pig. The sheep bleated in agreement, and so they all set off after the horse.
Even Engine 1 went, chugging slowly along the tracks as he watched for the tree blocking the way. Engine 2 was his friend, too, and he hoped the animals could help.
Soon he spotted it up ahead and tooted a greeting to Engine 2. She tooted back even though they couldn't see each other through the tree. It was indeed a big tree, with long, prickly branches full of small, prickly pine needles and rough, prickly pine cones. The horse hadn't been able to get close enough to the tree to push it and stood nearby, flicking his tail at the spots where he'd been poked. What now? The other animals had arrived and they all seemed to be making a plan...

Durable wooden set includes two engines, two train cars, enough track to make a figure 8, a barn, 6 different animals, trees and bushes, and two road signs... 35 pieces in all! Compatible with other popular wooden railways. Recommended for ages 3 and up.

On the Farm Magnetivity Play Set

MSRP:
Now: $59.99
Was:
The 102-piece magnetivity building set encourages kids to experiment, explore, and imagine their own farm. Magnetic accessories will stick to both the play figures but also to the magnetic panels...

MSRP:
Now: $69.99
Was:
Use the magnetic crane to keep this mining rail set running smoothly!  Pick up loads of ore from the back of the truck, then drop them into the loader and onto the waiting train. Recommended...

MSRP:
Now: $79.99
Was:
Train tracks aren't just for passenger trains. There's freight to deliver too! This double-loop city-themed railway set features a passenger train and a freight train, a station, a bridge, and much...

MSRP:
Now: $12.99
Was:
Add Thomas to your collection of Thomas and Friends train track set! Made of wood and magnets. Recommended for ages 2 and up.

MSRP:
Now: $29.99
Was:
Noah's Ark Wooden Toy Children can act out the beloved Bible story of Noah and the Ark as they help Noah herd the animals through the different shapes into the ark. Sorting shapes teaches children...

MSRP:
Now: $49.99
Was:
Timber Tots are back and better than ever! The Tree House set is a 2020 Toy of the Year Finalist and one of our favorites, Press the top button and the top lifts to show a whole home hidden inside...

MSRP:
Now: $24.99
Was:
Magnetic Fishing Game Kids will love having their own fishing tournament! Lay out the undersea-themed pieces on a flat surface, then one child rolls the dice and catches the pieces shown. If a piece...

MSRP:
Now: $39.99
Was:
Multi-Activity Blocks Adorable zoo-themed stacking blocks provide your child with hours of creative fun! Building blocks with letters, numbers, and pictures will inspire your toddler to create and...

MSRP:
Now: $19.99
Was:
90 Lacing Beads String the colorful beads together and make a beautiful necklace or a bracelet! Your toddler can practice hand-eye coordination and fine motor skills while having fun! Set promotes:...