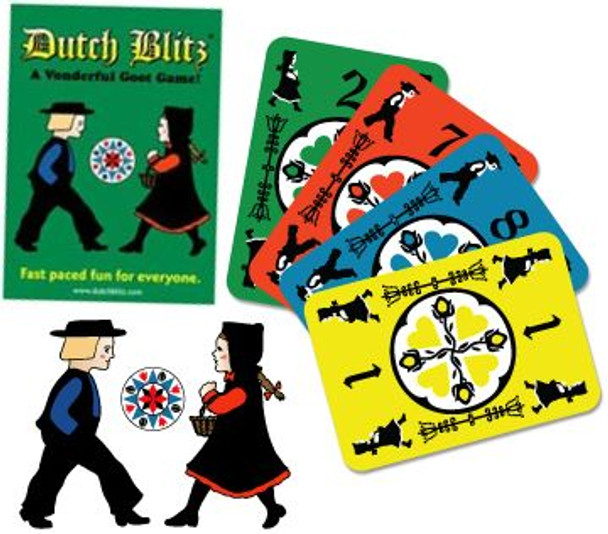 Dutch Blitz is a highly interactive, highly energetic, family-friendly card game that will test your skills, smarts and speed.

It's the kind of game that makes your brain work really hard. But because you're having so much fun, you won't even notice. Perfect for parties and family game nights, Dutch Blitz has been a favorite of card players for decades. And it's more popular today than ever.

Give it a try and we think you'll agree: Dutch Blitz is a vonderful goot game.

So what exactly is Dutch Blitz?
It's kind of like solitaire. But with multiple players. And a lot more speed. And color. And fun.

Dutch Blitz demands players think fast and act fast. It also demands that they keep an eye on their competition. That's why we think Dutch Blitz is most perfect party card game ever invented. We're pretty sure some of our fans would agree.

How did Dutch Blitz begin?
Dutch Blitz was the brainchild of Werner Ernst George Muller, a German immigrant and optometrist who thought the game might help his children more easily learn about colors and numbers.

We can't tell you whether or not Dutch Blitz accomplished that goal. All we know is that, somewhere along the line, Muller's game captured the imaginations of gamers throughout Eastern and Central Pennsylvania.

The game has since spread far and wide, and today, Dutch Blitz fans can be found in every corner of the world.

Can I play with more than 4 players?
Yes! Our biggest fans buy two or more decks of cards, give a distinct marking to each set, then play with 6 or more players.

MSRP:
Now: $11.99
Was:
Pass the sushi! In this fast-playing card game, the goal is to grab the best combination of sushi dishes as they whiz by. Score points for making the most maki rolls or for collecting a full set of...

MSRP:
Now: $9.99
Was:
About Wizard Card Game More fun than Hearts and Rummy, award-winning Wizard is "the Ultimate Game of Trump" the whole family can enjoy. The rules are easy to learn- the strategy adds an exciting...

MSRP:
Now: $12.99
Was:
The Dutch Blitz Expansion Pack is super fun game that is easy to learn and exciting to play.  You can use this pack alone or with original deck for up to 8 players. Game Includes: 160 cards and...

MSRP:
Now: $12.99
Was:
The Dutch Blitz Expansion Pack is super fun game that is easy to learn and exciting to play.  You can use this pack alone or with original deck for up to 8 players. Game Includes: 160 cards and...

MSRP:
Now: $7.99
Was:
There's room for lots of art and imagination with this large (17 x 20 in) easel pad. It's great for use on an easel, tabletop or the floor. Premium white bond paper is ideal for pencils, crayons,...

MSRP:
Now: $29.99
Was:
This kite was designed for the flyer who wants zero percent frustration and one hundred percent fun! Simple assembly and no-hassle flying make these beauties the easiest kites to fly. Fun, bright...