Donkey. It's a Kick! 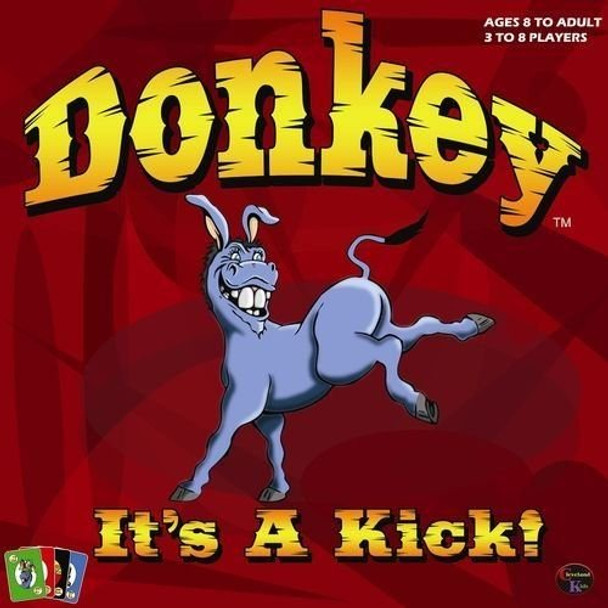 Donkey. It's a Kick!

Have you ever played the game spoons? Then you will love Donkey. It's a Kick! Game play is a lot like spoons only much more exciting.

1. Place one less puck in the middle of the table than there are players.

2. Dealer reads aloud the instructions on the Kicker Card, which will explain the challenge for this round of play. Dealer then deals the PLAYING CARDS accordingly.

3. While fulfilling the challenge of the Kicker Card, each player races to get the qualifying hand to grab the first puck from the table. If a player grabs a puck, each remaining player must quickly try to grab a puck. One player will come up short. That player scores the letter 'D' on their score card.

4. Once a player's score card spells D-O-N-K-E-Y, that player is officially out of the game, but is allowed to remain in play and wreak havoc on the remaining players in an effort to take them down with him. You won't get bored with this game! Each Kicker Card challenge makes every round unique! In addition, players get to 'police' other players and give them an unwanted letter score if they 'slip up.' Seasoned players of 8 or even 9 at a table will have this game over in 45 minutes or less! Once there's a D-O-N-K-E-Y in the game, the players start dropping like flies. There may only be one champion, but everyone walks away a winner with this game! Absolutely as much fun to lose as it is to win!

Origin of the Game:

When the Cleveland Kids were growing up, the long summer days were spent playing outdoor games, the majority of which they made up.  Most of the games were derived from games they had played the summer before but had either lost or broken the parts.

Broomball, much like baseball, was played in the street, but after losing the bat one year they substituted the broom, hitting the ball with the straw end.  The object was to hit the ball and run to the Dolahan’s mailbox and back for a home run.  Throwing the baseball at the runner was perfectly within the rules so they had to zigzag their way back to home base if they wanted to arrive with all of their body parts intact.

After they broke the last Croquet mallet using it for a hammer to build a fort, they invented a game called “Snook in the Grass.”  This was played by crawling on their belly in the grass, using the large end of a pool cue to hit the Croquet balls through the wickets, which were placed strategically in 6 locations, much like  the pockets on a pool table.  They had to remain where they were in the grass after they hit the ball, then toss the cue to the next player and hope that he didn’t have a bad aim, or a worse attitude.  This game came to an end the summer they used the wooden balls to play Broomball because they had lost the actual baseball.  The Croquet balls broke apart when they hit the pavement, which was probably a good thing because someone would have suffered permanent damage by taking one in the back.

When the days got short and the weather turned cold, they needed a good indoor game to keep 7 kids age 4 to 15, busy indoors.  Fortunately for them, their mother had an incredible imagination and could make a board game out of a Brussels Sprout and two clothespins.   She was the one who taught us the basics of the game “DONKEY.”  She changed the rules randomly to keep it interesting and to keep them out of her hair while she studied to take her nursing exam.  Before long they were making up their own rules, some of which involved sling shots and BB guns.  Clearly they still needed her guiding wisdom if they were to survive adolescence.

The years flew by in the flick of a Donkey’s tail and the list of “DONKEY” fans grew and grew until people started suggesting that maybe they should share this game with the rest of the world.  “That’s a great idea!” they said, and let another 10 years pass while they waited for a sign that the time was right.

Then one Fall day in 2010, their brother, Cleve (Yes, that’s his real name…Cleve Cleveland.  I believe I’ve already mentioned how creative their mother was and by the time her 4th son was born she didn’t want to miss what might be the last opportunity to use this “Clever” name.  Little did she know that 3 more sons would follow and she could have held onto it a little bit longer)  So there was Cleve, taking a scenic drive in the Nevada desert one Fall day when he sees what he thinks is a herd of wild horses coming across the plain.  He pulls his car over to the side of the road and gets out to take pictures and as they come closer he realizes that they’re not horses at all…he is looking at a herd of WILD DONKEYS!  And before he knows it, he is surrounded by these adorable little beggars who stick their noses inside his car and inside his pockets searching for anything edible, including lint.

“It’s a sign!” he calls out.   But no one can hear him because he doesn’t have enough bars on his phone and the call doesn’t go through.  As soon as he got back into town though, he called his sister and brother and said, “It’s time.”  And the rest is history.

MSRP:
Now: $9.99
Was:
Plush animals are some of the best "comforters" for young children.   They're super soft and squishable. Babies and young children will love them dearly.

MSRP:
Now: $3.99
Was:
High quality figurine from Safari Ltd. that will keep your imagination running for hours! Recommended for ages 3 and up.

MSRP:
Now: $4.99
Was:
This is the perfect children's poem book right in time for the winter season. Recommended for developing readers with adult help.

MSRP:
Now: $2.49
Was:
With this conveniently sized (6 x 9 in) premium white bond paper pad, it's easy to sketch, paint or doodle. Suitable for crayons, markers, chalk, watercolor or poster paints, or, of course, a pencil.

Don't You Wish Your Girlfriend Could Surf Like Me Sticker

MSRP:
Now: $2.99
Was:
Show your sassy side with this, don't you wish your girlfriend could surf like me sticker.  You can just peel and stick wherever you would like to prove this point.  The sticker dimensions...

MSRP:
Now: $13.99
Was:
The Ultra-Star that changes color in the sun!The Ultra-Star is the world standard for the sport of Ultimate, and the official disc of the Ultimate Players Association Championship Series. With its...