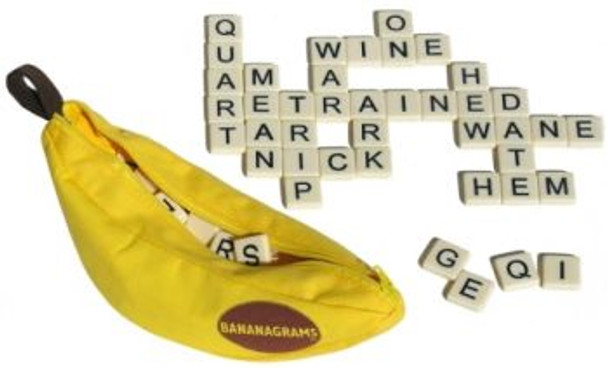 NOW THE GAME BEGINS!!! Any one player says "SPLIT" whereupon all players turn their own tiles face up and proceed to form their OWN collection of connecting and intersecting words. The words may be horizontal or vertical, reading left to right or top to bottom. Each player may rearrange his/her own words as often as desired. Players DO NOT take turns, but play independently of each other and at the same time.

When a player has none of his/her original letters left, that player says "PEEL" and takes a tile from the bunch. At this point ALL OF THE OTHER PLAYERS MUST ALSO TAKE A TILE FROM THE BUNCH and add it to their collection of letters.

At any time, and as often as desired during play, any player may return a difficult-to-use letter back to the center of the BUNCH, face down, but MUST TAKE THREE LETTERS IN RETURN. The player must declare this action to the other players by saying "DUMP". This exchange does not affect the other players.

Play continues until there are fewer tiles in the BUNCH than there are players. The first player with no remaining letters shouts "BANANAS" and is the winner of that hand. The other players may now inspect the winning hand for misspelled or incorrect words. Proper nouns are not acceptable. Any available dictionary may be used. If all words are acceptable, that player is the WINNER OF THAT HAND. If any word in the "winning" hand is found to be unacceptable, that player becomes the "Rotten Banana" and is OUT OF THAT HAND, and must return his/her letters, face down to the center bunch and the game now resumes for the remaining players.

MSRP:
Now: $19.99
Was:
Smart 10 is the portable guessing game where everyone gets a chance on every question!  Each card contains ten possible answers. On your turn, if you answer correctly, gain a point and pass to...

MSRP:
Now: $36.99
Was:
If you love our top-selling soft Baby Stella collection, you'll love our new addition! Our new baby Boy newborn is the cutest little guy around. Like the others, he has lifelike toes, belly button...

MSRP:
Now: $17.99
Was:
Anomia: [uh-NO-mee-uh] - Noun - 1) A problem with word finding or recall. 2) Chaos. 3) The game where common knowledge becomes uncommonly fun! Anomia plays off the fact that our minds are positively...