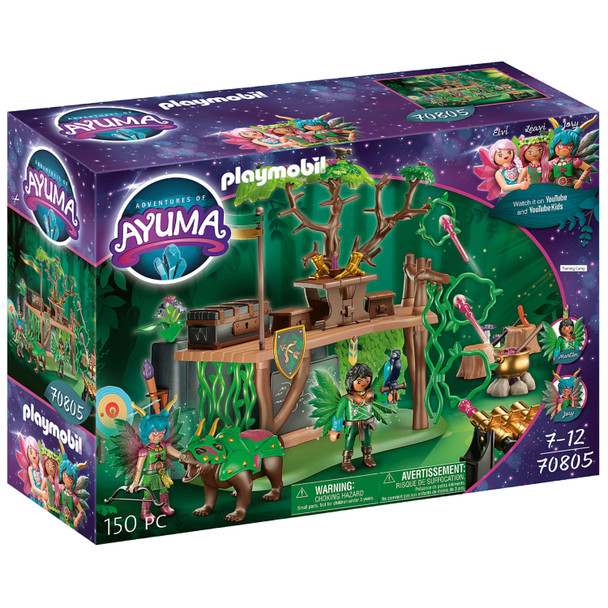 At the Training Camp, the fairies and their animal companions practice their special skills, such as climbing, marksmanship, and defensive combat training. The blackboard in the training room can be used with the included pen. Use the included duster to erase the blackboard and use again!

The sinister plans of the dark Bat Fairies put the fairy world in great danger. That's why the Knight Fairies and their magical soul animals are working on their special skills at their Training Camp. On the rocks and on the swinging liana net, they train climbing technique and endurance. To improve their shooting technique, there is a target with bow and arrow and a special fairy cannon. You need a lot of dexterity to shoot the fairy dust projectiles through the liana rings. The fairies record their strategy plans on the blackboard. Thanks to the sponge, they can change and revise their concept again and again. With so much training, there must also be a breather, so the fairies use the wooden platform and treat themselves to a delicious picnic for refreshment.

The playset includes a Knight Fairy with Kodiak bear soul animal, a Knight Fairy man with falcon, a Training Camp with picnic platform and climbing rock, a fairy dust cannon with projectiles, a target, bow and arrow, a blackboard and many other exciting extras.

Recommended for ages 7 and up.

MSRP:
Now: $29.99
Was:
Ayuma Fairy Hut The cozy Fairy Hut is home to the fairies. With the help of the included hook, the house can be hung from the Fairy Community Tree or in a child's bedroom. It can also be decorated...

MSRP:
Now: $21.99
Was:
Ayuma Crystal Fairy And Bat Fairy The enchanting Crystal Fairies live together with their faithful soul animals in peace and quiet in the idyllic fairy forest. Soul animals and fairies are united by...

MSRP:
Now: $89.99
Was:
Ayuma Tree Of Wisdom The Tree of Wisdom is an advisor to the fairies. It will open its eyes and wake up when you turn one of its branches. Ask it a question and you will receive an answer on a...

MSRP:
Now: $18.99
Was:
Ayuma Forest Fairy with Soul Animal In the magical fairy forest, the enchanting fairies and their soul animals live in perfect harmony. The Forest Fairy has a very special stag by her side as her...

MSRP:
Now: $89.99
Was:
Ayuma Tree Of Wisdom The Tree of Wisdom is an advisor to the fairies. It will open its eyes and wake up when you turn one of its branches. Ask it a question and you will receive an answer on a...

MSRP:
Now: $5.99
Was:
Hi There - You're a Gem Be curious; take the road less traveled. There's no telling what gems you might unearth along your journey. In the meantime, start by growing crystals at home between video...

MSRP:
Now: $7.99
Was:
Hi There - Succulent Sculpture No green thumb? No prob- use these clever connectors to create a cactus that requires no water, soil, or light. 25 clever connectors and plant pot display and storage...