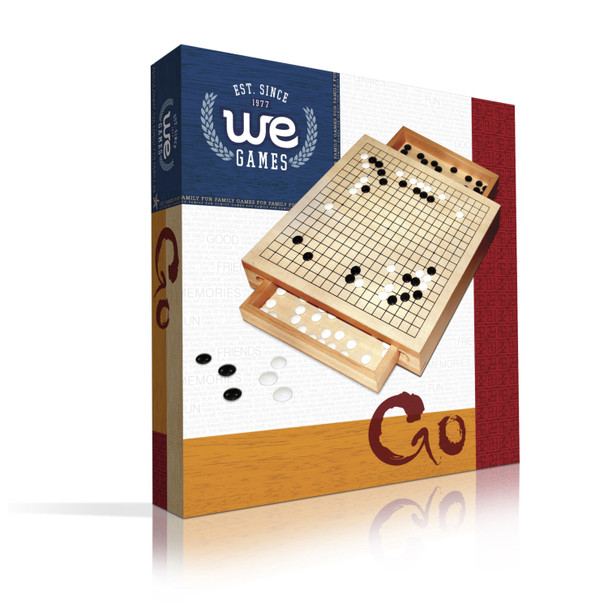 This high-quality set includes a beautiful wood board with pull-out drawers for storing stones when not in use. Go is an ancient game of Chinese origin that rewards patience and concentration rather than greed and aggression. The shifting balance of territory and power can unnerve even the most disciplined and intellectual player.

The origins of the game of GO are masked in the haze of ancient Asian history, however it is thought to have originated at least 4,000 to 5,000 years ago.

Some say the board was originally used as a precursor to the abacus, while others believe that it was used as a fortune-telling tool, with the black and white stones representing the yin and the yang. Another famous legend says that the game was created by an ancient emperor.

By the time of Confucius (around 600 B.C.) GO was already considered one of the "Four Accomplishments" (along with brush painting, poetry, and music) that was required of the Chinese gentleman.

GO is the second most played board game in the world, and the oldest board game played in its original form. Like the martial arts, GO is an exercise in concentration, balance, and discipline. GO can be learned in minutes, but can take a lifetime to master.

MSRP:
Now: $24.99
Was:
Makit wood toys are the classic wood construction toy - consisting of wooden wheels, squares, dowels, and more!  "Makit toys of today train engineers of tomorrow" Recommended for ages 3 and up.

MSRP:
Now: $9.99
Was:
The gift set is a great starter piece for the world of Playmobil! It also makes a great addition to any existing set.4

MSRP:
Now: $17.99
Was:
Plus Plus are all one shape, but they bring building to a whole new level. In this set you are building a lunar rover, but the possibilities are endless with your imagination. Includes 200 pieces...

MSRP:
Now: $8.99
Was:
Birthday Candles - Zombie Somehow you just keep coming back year after year. Good for you! Now go enjoy your birthday brains. 4 candles per set. These Zombie candles are 2.75" tall

MSRP:
Now: $6.99
Was:
Linus Grey And White Lemur Beanie Boos Plush My snout is long and pointed, my face is black and white. I have a long ringed tail and sometimes hunt at night. I come from Madagascar, that's my native...

MSRP:
Now: $7.99
Was:
Bubble Bath Whisk - Blue The HABA Bubble Bath Whisk makes bath time a blast as your little one creates fantastic foaming bubbles. Just stick it in the water, turn the crank, and your child will...