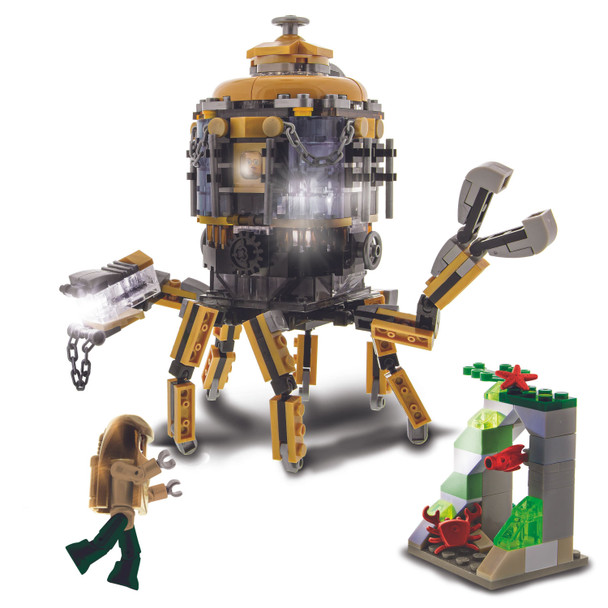 Meet the Beast of the Sea: The Iron Octopod! This 8-legged deep-sea exploring capsule will take you on a whole new adventure to discover amazing worlds and uncover lost secrets of the deepest oceans. There's no abyss too dark with the Iron Octopod to light the way.
Welcome to Explorers, Inc.

The Explorers, Inc. story centers around a brilliant young inventor and a team of young adventurers who've been sent beneath the sea on a mission of discovery. Backed by a wealthy and famous explorer, Thaddeus Smith, the team is looking to unlock the secrets of a mysterious artifact and its connection to wondrous creatures of the depths. It's a race against time, as Thaddeus' equally wealthy and jealous brother has sent his own team on the very same quest. Who will recover the artifact and build The Gateway first?

Each Explorer, Inc. set comes with an action figure. But there is nothing mini about this guy. With 10x more pivot points than other brands, he's built to sit, stand, and even power stance (And all points in between). This figure connects seamlessly with the Laser Peg system and is compatible with competing figure accessories like hats/helmets, hair, and hand-held items.

Not only do Laser Pegs light up, but they help light up your kids' imagination for hours! Screen-free toys help boost kids' independent play and problem-solving skills and give them the joy of coming up with new stories all on their own. This set makes a great gift for kids as building and rebuilding extend the light-up play endlessly!

Let them show off their mad-building skills and creativity! Easy-to-follow instructions help make assembly a snap for kids, leading to pride in creating and loads of fun. Got an explorer at home? They're going to love this cool set. This construction set makes a great Christmas, birthday, or anytime gift for boys and girls aged 8 and up.

MSRP:
Now: $27.99
Was:
Laser Pegs Explorers Inc. Leviathan Deep down on the ocean floor lies creatures galore! But none compare to the greatest beast yet: The Leviathan Sea Dragon. A predator and defender of the sea, The...

MSRP:
Now: $27.99
Was:
Laser Pegs Explorers Inc. Leviathan Deep down on the ocean floor lies creatures galore! But none compare to the greatest beast yet: The Leviathan Sea Dragon. A predator and defender of the sea, The...

MSRP:
Now: $12.99
Was:
KidzLabs Robotic Hand Extend your human hand with this gripping robotic hand that you build yourself! Includes all the parts you need and instructions with fun facts. Once it's built, you'll have a...

MSRP:
Now: $36.99
Was:
"Crawl, Aim, and Catch!" The Robosaur is ready to move and go with you! Control the creature with the multi-directional remote control and even flash the lights on its...